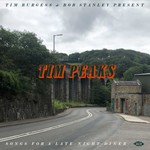 The Pacific North West and the English North West are damp, mossy, riddled with steep, unexpected valleys, dotted with abandoned mills, and frequently cloaked in mist. Most of the year you'd be wise to wear waterproofs. David Lynch set Twin Peaks in the former; it's not a great leap to imagine it being re-cast and set in the latter. Paddy Considine would probably be involved; Yorkshire Tea, too. As for the soundtrack? Well, that's what this album is about.

Tim Burgess grew up in Northwich, Cheshire, and that's where I first him, on the terraces at Witton Albion FC just about 30 years ago. I was writing about new Manchester bands for Melody Maker, and Tim was emphasising, rightly, that he was from a town near Manchester, but not Manchester. Northwich is a most unusual town in that it is built on salt - not surface sea salt like Maldon, but Siberian-style underground salt. Houses occasionally collapse into the soft, salt mine shafts underneath. I find this fascinating, but Tim and I have never talked about it, because we are usually talking about our shared love of old records, with Factory Records a recurring theme, or Twin Peaks, which both of us consider to be the greatest TV series ever made.

We also share a love of cafés, but here we differ because Tim has gone the extra mile and set up the Tim Peaks Diner, which moves from festival to festival, combining tea, coffee and music. This, then, is a soundtrack for the Tim Peaks Diner at dusk, maybe just a couple of tables occupied. As it's imaginary, I'd like to think Peggy Lipton could still be working there. Maybe her beau Everett McGill has popped in at the end of the day, ordered coffee and a slice of pie, and put a couple of quid in the Wurlitzer 2000 jukebox. Outside, the mists are rising and the rain is falling.

I grew up in Croydon which, musically, had no-one but the Damned to be proud of. 'Happy Talk' reaching #1 in 1982 gave the town a gentle glow for a couple of weeks, but it was still slightly embarrassing compared to the contemporaneous music coming out of Manchester, Sheffield, Liverpool and the towns in between. Music aside, my other late teens obsession was British New Wave cinema - almost always shot in the north - and the novels of Keith Waterhouse, Alan Sillitoe, Barry Hines and Stan Barstow. I felt like I was living in the wrong place, although I had no family connection with the north of England at all. I was imagining a north that spanned two very different times - the early 60s and the early 80s, the industrial and the post-industrial.

There was little heavy industry in Croydon, but we did have the first iron railway, a semi-abandoned airport, a bizarre number of derelict mental hospitals, and the sharp topography of the North Downs close by. If I squinted, I could imagine myself amid the mills of the north. Eventually, I went on a youth hostelling holiday with my friend Pete Wiggs, both heading north of London for the first time in our lives. We found the HQ of The Fall Foundation on Bury New Road in Manchester, just south of the group's semi-mythical Prestwich locale. We saw Pete Burns on his way to work in Probe Records, Liverpool, with bells on his cape that dragged along the ground behind him (yes, he looked terrifying). We stood outside the Hacienda, but didn't go in.

Tony Wilson once described the Fall as "urban folk music". He was right, although there's a strong argument that with Factory Records he created something that also explored the geography, topography and myth of Manchester and beyond. Listening to the Royal Family & the Poor, or Stockholm Monsters, or (especially) Durutti Column, I'm further up the Bury New Road, out towards Rawtenstall, Barnoldswick, the home of the Pendle witches; or I'm over Saddleworth Moors, in West Yorkshire, down into Crag Vale with its murderous coiners, an 18th century analogy to Jean and Jacques Renault.

This is a soundtrack for a mythical café in a mythical north, so not everything here needs to have been released by Factory, or originated in the north west, it just needs the right feel, the right temperature. It's quite likely that our parallel-world David Lynch might want to set his show in the equally damp, equally green valleys of South Wales, which is reason enough to include minimal miniatures by Young Marble Giants and the Gist, as well as Gwenno's ice crystal electronica. Not that the music needs to originate from Britain at all - there are tracks here from Sweden, New Zealand and the US too; it's a fictional show, and a fictional venue after all. The music here spans more than three decades - does this diner exist in the present day, or the past? Does this even matter? Order another Tim Peaks coffee. There's no clock on the wall. It's cold outside. Stay awhile.