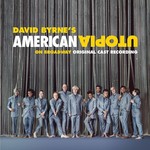 David Byrne's sold out international tour in support of his first-ever chart-topping album was the most critically lauded tour of 2018, with fans and critics comparing it to his legendary Stop Making Sense tour with the Talking Heads.