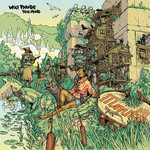 Thin Mind has sci-fi, post-apocalyptic and dystopian narratives interwoven throughout. These themes emerged while working at Risque Disque, which Boeckner jokingly describes as a Dutchman's failed utopia, a problematic structure with a post-apocalyptic vibe: the studio is housed in a stone barn hand-built by the Dutchman in the middle of the woods, using local materials and based on his memory of a building he loved growing up in the Netherlands.

Thin Mind finds the core members of Wolf Parade working as a trio, as they did on past albums Apologies to the Queen Mary and At Mount Zoomer, with songwriting duties evenly split between singers Dan Boeckner and Spencer Krug