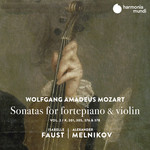 Using period instruments, Isabelle Faust and Alexander Melnikov breathe new life into these 'sonatas for keyboard with violin accompaniment', a tradition Mozart renewed from within, blazing the trail for Beethoven, Schubert and Schumann. The first volume was widely praised: 'The greater similarity of tone between Faust's sparkling violin and Melnikov's glittering fortepiano (within an airier acoustic) results in a sound more akin to the jingling of small bells. It's delicious' (Gramophone). 'In a world full of star violinists, all with technical facility and individual style, it's rare to find one that everyone agrees is just - brilliant. Isabelle Faust is that violinist' (The Strad).

"The seasoned pairing of Isabelle Faust and Alexander Melnikov promises to match all comers in style and fantasy. From the puckish opening Allegro of K376…you're aware of an eager creative partnership, with Faust and Melnikov delightedly seconding and undercutting each other… True spontaneity is elusive in the recording studio. Faust and Melnikov give the illusion, at least, that they are responding to and recreating the music on the spot. Roll on Vol 3." Gramophone Editor's Choice March 2020

"Melnikov's playing avoids the "clattering noise" Mozart disliked in instruments other than those made by Andreas Stein (Walter's teacher), and this musical partnership is now one of the most rewarding today." Sunday Times

"Anyone who regards fortepianos only as clatter machines should listen to the delicacies coaxed by Melnikov from his modern reproduction of a 1795 original. Faust has her own wonder, a 1704 Stradivarius, often deployed in long singing lines that make some movements seem like operatic arias instrumentally arranged...Music and music-making of consummate wit, rainbow colours and ensemble panache. This album is an utter delight." The Times Five Stars