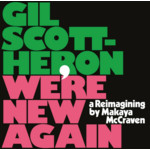 To mark the tenth anniversary of I'm New Here's release, XL Recordings present a unique reimagining of the album by the acclaimed Chicago-based musician Makaya McCraven, whose work Russell first discovered after hearing McCraven's "Above & Beyond", from 2017's Highly Rare album.

Equally renowned and revered as a musician, drummer, sampler, beat-maker and producer, McCraven is widely regarded as one of the most exciting and original voices in modern jazz via a run of records that were at once genre-defying and redefining such as Universal Beings, Highly Rare and Where We Come From (CHICAGOxLONDON mixtape) for the highly influential Chicago label International Anthem. As the New York Times states: "Makaya McCraven has quietly become one of the best arguments for jazz's vitality."

On We're New Again, recorded and produced in the main at his Chicago home studio with a host of close-knit musicians, McCraven fuses the kind of killer, improvised live musicianship and electronic, sample-based approach to recording he's renowned for with that vocal - the deep, stop-you-in-your-tracks, worldly-wise voice of Gil Scott-Heron - to enormously powerful effect.