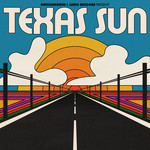 Texas Sun started on the road and wrapped up in the studio. Both Bridges and Khruangbin had been touring nonstop behind their acclaimed sophomore LPs when their paths converged for a joint North American tour in 2018, a run of shows stretching from Los Angeles to New York.

Although both of their musical lanes were slightly different, they shared a dusty, laid back vibe. When a Khruangbin session yielded a song that seemed like it might pair well with Bridges' voice, the band sent it over. Bridges returned the track with his vocals the very next day. They all soon decamped to the studio with engineer Steve Christensen, hoping to make it into a B-side. But everything flowed so naturally, it was obvious this would be something bigger, leading to Texas Sun.

All The Good Times