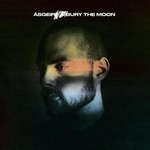 The story of 'Bury The Moon' - or 'Sátt', to give the record its Icelandic title - begins with heartbreak and escape. Ásgeir watched a long-term relationship disintegrate, and decided that he needed to get away, to lose himself in the endless Icelandic countryside. Retreating to a summerhouse, a tiny rural home used by those on the island, he spent the winter writing, just him, his guitar, and those endless reflections on love and loss.

At times, 'Bury The Moon' is a bruising, achingly personal experience, with shades of the endless isolation Ásgeir put himself through in that remote summerhouse. "I took my guitar, a small keyboard, and a very simple recording set up," he recalls. "And that was it."

Unfurling his new ideas in the studio, he started to gather like-minds, fellow travellers, and guest lyricists to work on his music. Indeed, that's the way he's always worked - Ásgeir sculpts the melodies, the arrangements, while the words form this counterbalance, penned by other figures.

Einar Georg Einarsson wrote many of the lyrics for Ásgeir's extraordinary debut, and this partnership has only strengthened and deepened their father-son relationship. "I think the lyrical side of the album is, at times, a bit more personal for me now, because my Dad and I did it together. We spent a lot of time together".