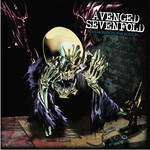 Diamonds In The Roughwas originally released on CD in 2008 as part of the DVD+CD release "Live in the LBC/Diamonds in the Rough". It is a compilation of b-sides recorded during the making of the band's self-titled 2007 debut, rarities, covers and other non-album tracks.

The 2020 vinyl release of the album is expanded by 5 tracks, featuring the unreleased track "Set Me Free" (recorded during the "Hail To The King" sessions). It also includes other hard-to-find tracks such as the fan-favorite "St, James", "4AM" and "Lost It All". The 16-track album also includes the band's cover of Black Sabbath's "Paranoid", which originally came out in 2009 on the Warner album "Covered".

The vinyl is released on limited edition clear vinyl.