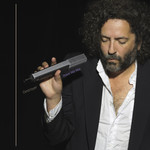 Culled from years' worth of saved writing, set aside for projects "beyond music," and recorded at his kitchen table, Have We Met harkens back to Kaputt-era Dan Bejar stringing together lyrics off hand while lounging on his couch. The resulting vocal sound exists in the sweet spot between two Destroyer worlds colliding: hints of the past, more strident Destroyer mixed in with a relaxed, new-aged Crooning one.

No re-recording. No cleaning up. The Destroyer band-orientated approach was shelved, and frequent collaborator John Collins was tasked with the role of layering synth and rhythm sections over a stream-of-consciousness Bejar, as Nic Bragg added 'completely unexpected and somehow comforting' three-dimensional, shredding guitar.

Thirteen albums in, Have We Met manages to meet somewhere between trademarks and new territory - atmospheric approximations of feeling and place, wry gut-punches of one liners, and the deluge of energy meets a thematic catharsis of modern dread, delivered with an effortless, entrancing directness.