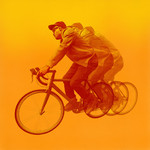 Recorded at Paris's iconic Studios Ferber with producer Renaud Letang (Feist, Manu Chao), aloha is Little's first album to be recorded with an outside producer. The result is his boldest, most self-assured statement yet. It's an ambitious work of vision and reflection, and an ecstatic testament to the freedom that comes from trusting the currents of life to carry you where you belong.

In order to create aloha, Little began writing and assembling album demos in Petaluma, California. However, after his hard drive fried and he lost nearly a dozen detailed demos, he was forced to begin with a blank slate, leading him to write aloha in only eight days at a tiny house and its adjacent barn. While Little plays nearly every instrument on the album himself, he put his songs in the hands of an outside producer for the first time here. The entire project was an exercise in letting go, in ceding control, in surrendering to fate.