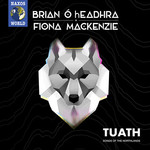 TUATH is a musical and cultural exploration of the connections between the Gaels and their nearest neighbours. This includes new Gaelic songs written especially for the album, as well as traditional tunes recorded in Danish, Norwegian, Irish Gaelic and Galician. Featuring ancient and modern texts, the songs speak to our past, present and future with music ranging from the simple voice to expansive arrangements and exquisite sound design. Brian & Fiona's debut album, TÌR: Highland Life & Lore, was nominated for Album of the Year at the 2018 International Folk Music Awards. Brian was also nominated for Gaelic Singer of the Year at the Scots Trad Music Awards 2019.