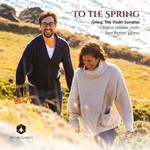 Grieg returned to the violin sonata more than any other form, writing three Violin Sonatas that chart the trajectory of his style, as the composer himself said: "the first naïve, rich in ideas, the second national and the third with a wider horizon". Violinist Elena Urioste and pianist Tom Poster, both former BBC New Generations Artists, feel a special connection with Grieg's Violin Sonatas, presented on this release alongside the artists' own arrangements of two exquisite Grieg miniatures: To the Spring and Last Spring. Elena Urioste has performed with the major BBC orchestras, as well as a who's who of ensembles from the New York Philharmonic to the Chineke! Orchestra. Tom Poster has performed over 40 concertos with some of the world's most prestigious orchestras and conductors, frequently performs at the BBC Proms and Wigmore Hall, and features regularly on BBC radio and television.

"Overall, though, this disc is demonstrates the vitality and commitment of the players and I hope Urioste and Poster will consider recording other sonatas such as the Franck of the three Brahms." MusicWeb