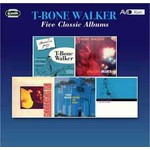 With arrangements plus five compositions by the ubiquitous West Coast legend Shorty Rogers our first selection "The Five" features five fresh musicians who together bring a new interpretation to Rogers' work. Having previously composed and arranged for a fairly limited group of mainly West Coast musicians, The Five who comprise Pete Jolly- piano, Buddy Clark-bass, Mel Lewis-drums, Conte Candoli-trumpet and Bill Perkins tenor sax, all bring something new to the studio, namely "fresh musical ideas". Arranging the next number while the previous one was being recorded, Rogers and The Five created a little bit of magic in the studio between the hours of 2.00pm and 1.30am! Meet "The Brothers"-three tenor sax men on a mission to "wail"! Al Cohn, Bill Perkins and Richie Kamuca ably assisted by Hank Jones on piano, Barry Galbraith on guitar, John Beal on bass, Chuck Flores on drums with Jimmy Raney replacing Galbraith on guitar for some cuts. As the original liner notes suggest, at times you may find it difficult to distinguish between the three tenors as often they "attempt to blend and integrate their personalities" However again quoting from the original liner notes "the one unifying factor is the ability to create living and vibrant sounds while so many others just attempt to". More multiple tenors greet us for the next selection appropriately titled "Tenors Head-On". This time, however, there are just two cats, namely Bill Perkins and once again Richie Kamuca who are joined again by Pete Jolly on piano with new sidemen Red Mitchell on bass and Stan Levey on drums. Both veterans of the Woody Herman Herd, Perkins and Kamuca had both spent a great deal of time practising on their instruments together while discussing the great tenor sax players, particularly their main man Lester Young. Recorded in one complete session and without any written arrangements in order to encourage spontaneity, as the originl liner notes attest "this fine album more than successfully combines these two major talents in a free swinging, right from the head session…….brimming with spirit, emotion and spontaneity". Our final selection "On Stage" features the first solo recordings by Bill Perkins under his own name! Once again we have a trio of saxes plus a couple more horns for good measure! Bill Perkins on tenor, Bud Shank on alto, Jack Nimitz on baritone sax and bass clarinet, Stu Williamson on trumpet and valve trombone, Carl Fontana on trombone together with Russ Freeman on piano, Red Mitchell on bass and Mel Lewis on drums. A few quotes from the original liner notes tell us what the jazz world had to say about Mr Perkins at this time. Firstly from Woody Herman tenor man Jerry Coker... "has the best sound in jazz today". From one of the great sax men of the day, Stan Getz who stated "Perkins is blowing more than any of us".

All four albums have been digitally re-mastered