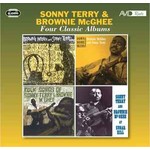 Following the success of our AVID Roots series which includes classic blues names from Muddy Waters, Howlin' Wolf, Lightnin' Hopkins, Jimmy Reed, B.B King to Lonnie Johnson, T Bone Walker and John Lee Hooker we thought it was time to add another name to our Roots roster. The legendary blues duo that is Saunders Terrell or Teddell(?) & Walter Brown McGhee, better known to blues fans as Sonny Terry & Brownie McGhee. This pair of Piedmont blues artists were probably the most well-known names in blues to many non-blues music lovers. They were arguably one of the most recorded artists in the blues catalogue, due both to their undoubted popularity and their long careers which stretched for the 1930s to the 1980-90s. Sonny Terry born in 1911 had gone blind by age 16 and turned to music as a blues harmonica player to make a living. Famously he had accompanied the legendary Piedmont blues singer Blind Boy Fuller and also performed at the 1938 Carnegie Hall From Spirituals to Swing Concert where Robert Johnson had been sought to play but had died some months earlier. Following the death of Blind Boy Fuller in 1941, Sonny travelled to New York where, in 1942, he hooked up with Brownie McGhee who he had met while also working with Fuller. Brownie McGhee born in 1915 began his musical career playing in gospel harmony groups. At a young age he contracted polio which incapacitated him until surgery enabled him to walk once again. He also worked with Blind Boy Fuller and on his death in 1941, briefly became known as Blind Boy Fuller 2. The long career of Sonny Terry & Brownie McGhee really took off with the folk/blues revival in the US during the late 1950s and 1960s. They were much in demand at folk/blues festivals like Newport and Ann Arbor and other shows and festivals around the world. They visited the UK on more than one occasion during the blues boom of the 1960s. They had also both been theatre, film and TV performers. Not a bad career for a couple of itinerant blues singers! Sit back and enjoy.