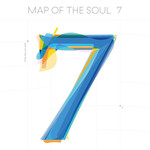 MAP OF THE SOUL: 7, the seventh studio album from the multi-platinum selling South Korean boy band.

The release follows BTS World, the audio accompaniment to their mobile game app of the same name which featured guest appearances from Charli XCX, Zara Larrson, Juice Wrld, and Map of the Soul: Persona, their 2019 EP.

Their 2018 album Love Yourself: Answer also topped the "Billboard 200", which made the BTS the first group since The Beatles to have three #1 albums on the US charts in less than a year.

(stock will be random as to which version of the artwork customer receives).