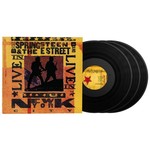 Bruce Springsteen and The E Street Band's triumphant reunion tour was one of rock's great moments at the end of the 20th century.

Now, 'Live In New York City,' recorded over two nights at Madison Square Garden in the summer of 2000, is repressed on vinyl for the first time since its original release. This 3LP set features all the highlights of those shows, including "Born To Run," "Badlands" and the powerful "American Skin (41 Shots)."

SIDE B
1. Tenth Avenue Freeze-Out
2. Land Of Hope And Dreams

SIDE B
1. Jungleland
2. Ramrod
3. It I Should Fall Behind