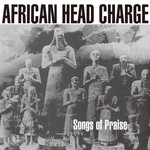 Songs Of Praise, the 1990 experimental dub masterpiece from Adrian Sherwood and Bonjo Iyabinghi Noah, gets a deluxe reissue in its 30th birthday year.

Considered by most fans to be AHC's masterpiece. One of the prominent elements throughout African Head Charge's discography has been the ethnomusicology influence. On Songs Of Praise this is even more pronounced, featuring religious chants set to an African dub backdrop of hand percussion, with a mighty sonic and great musicianship. A significant record both for African Head Charge and On-U Sound, originally released in 1990.

This reissue has been expanded to a double LP with all the tracks from the original release plus bonus tracks.