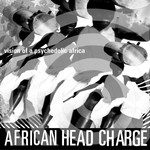 The first album African Head Charge made for On-U since 1993, this 2005 set was a triumphant return that saw longtime collaborators Bonjo Iyabinghi Noah and Adrian Sherwood reunited in the studio once more.

This album is African Head Charge at their very best, rich in varied percussion and spiritual chants, set over hypnotic and transcendent layers of African rhythms, trippy and bubbling dubbed-out effects, and trademark pounding bass.

Bonjo Iyabinghi Noah is on vocal duties and assisted with ground-shaking grooves from On-U mainstays Doug Wimbish, Skip McDonald, and Jazzwad (amongst others). The resulting sound sculptures on this 2005 album are whipped into a dubwise frenzy by label head Adrian Sherwood. A great entry in the rich AHC back catalogue, and a fitting way to mark their return to the label.

This is the first time the album has been released on vinyl. Two bonus tracks are also included.