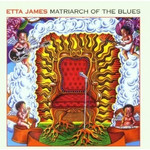 Matriarch of the Blues, as Etta James is called many times, is an 2000 album marking her return to the blues, after recording country, jazz, and pop songs. The album reached a peak position of number two on Billboard's Top Blues Albums chart, and was nominated for Best Contemporary Blues Album at the 44th Grammy Awards. Matriarch of the Blues includes earthy renditions of Bob Dylan's "Gotta Serve Somebody," Al Green's "Rhymes," Otis Redding's "Try a Little Tenderness,", Ray Charles' "Come Back Baby" and Rolling Stones' "Miss You." It's pure magic, with her incredible vocal range and impressive blues versions of these classics. She reclaims her throne and does this with the best she has to offer.