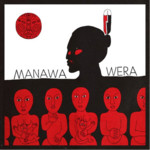 Inspired by classic reggae and soul records of the 1970's, Manawa Wera presents a classic sound in a modern Aotearoa context. The album is influenced by the personal journey Ria Hall has been on since the release of 2017's Rules of Engagement and inspired by the current Indigenous uprising across the globe.

Moving effortlessly across reggae, rock and roots, Manawa Wera puts the stunning voice and award-winning lyrics of Hall front and centre at all times. Manawa Wera is co-written and produced by Laughton Kora, featuring his vocals throughout, along with an all-star band including members of Katchafire, L.A.B., Sons of Zion and TrinityRoots - recorded live in studio, each player brings their unique experiences and feel to the release. Backing vocals are gifted from Hall's close comrades Troy Kingi and Rob Ruha.

Manawa Wera is a project that has been created with the intention of ensuring and upholding the mana of Aotearoa reggae. Each aspect of the project - from the sonic feel of each instrument to the name of the album - has been done in service of its reggae foundations. Above all Manawa Wera sounds like Ria Hall - the sound of a wahine Māori.

The album artwork is by the legendary Robyn Kahukiwa.