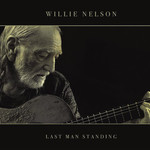 $49.00 In stock with supplier
ETA: 2-5 business days add to cart more by this artist

Last Man Standing, comprised entirely of songs newly-penned by Willie Nelson (and longtime collaborator and producer Buddy Cannon), is the worthy successor to Willie's "God's Problem Child", which showcased seven Nelson-Cannon compositions and debuted at #1 on the Country cahrts in the USA. Willie and Buddy have been working together since 2008 with Cannon producing more than a dozen of Willie's albums.

The songwriting duo deploys a unique strategy of shared composition, beginning with back-and-forth text messaging of lyrics with the melodies. On "Last Man Standing", Nelson and Cannon's unorthodox generated eleven original songs, "Willie's a jazz singer and jazz player. He's an improvisational musician. It's different every thime. Get a good take and go with it," says Cannon.
Release Issue: 16/18

An album that acknowledges the transience of time while marvelling at the joy, beauty and surprise the world has to offer, "Last Man Standing" finds Willie Nelson rolling at a creative peak, writing and singing and playing with the seasoned wit and wisdom that comes from the road.