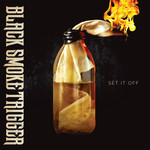 Set It Off, the debut release from Napier hard rock band Black Smoke Trigger, is now available on coloured vinyl.