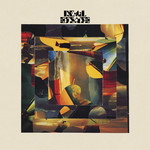 Over the last decade, Real Estate have crafted warm yet meticulous pop-minded music, specializing in soaring melodies that are sentimentally evocative and unmistakably their own. The new album dives even further into the musical dichotomies they're known for-lilting, bright guitar lines set against emotionally nuanced lyrics, complex arrangements conveyed breezily-and is a declaration of music making's centrality to their own senses of self.

While 2017's In Mind longed for normalcy against the backdrop of a life as strange as a touring musician's, The Main Thing brings that longing to a universal and urgent place, acknowledging the anxieties inherent in protecting a quiet existence. Recorded over the course of a year with engineer Kevin McMahon (Days) in countless sessions at Marcata Sound in upstate New York, The Main Thing is the result of many deep conversations, reflecting on the band's collective concerns: existential, environmental, and political.

The band - Martin Courtney, Alex Bleeker, Julian Lynch, Matthew Kallman, and Jackson Pollis - also underwent a collaborative evolution, which saw each member experimenting in new roles, and for the first time, bringing in outside players (a string quartet, Amelia Meath of Sylvan Esso, Matt Barrick of the Walkmen, and Aaron Johnston of Brazilian Girls) to round out the sessions.