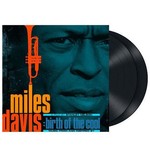 Miles Davis
Music From And Inspired By Birth Of The Cool, A Film By Stanley Nelson (LP)

The definitive audio companion to the critically-acclaimed new documentary directed and produced by Stanley Nelson, the soundtrack is an essential Miles Davis playlist for seasoned fans and new listeners alike, lovingly curated by the director and paired with short commentary audio excerpts from the film for a unique listening experience.

It brings together recordings and performances spanning labels and the artist's musical evolution--from "Donna Lee" (a 1947 Savoy master take with legendary alto saxophonist Charlie Parker) to "Moon Dreams" from the groundbreaking 1949 Capitol sessions that were ultimately collected on the album Birth Of The Cool, through the seminal 1950s pieces for Columbia that revolutionized the worlds of jazz and popular music (including "Generique," Miles' improvised soundtrack to Louis Malle's "Elevator to the Gallows" as well as tracks from Miles Ahead and, of course the most popular jazz album of all time, Kind of Blue).

The album also highlights Miles's evolution in the 1960s with tracks from Sketches of Spain and Someday My Prince Will Come to his iconoclastic invention of electric jazz/fusion (exemplified in a 45rpm single edit of "Miles Runs the Voodoo Down" from Bitches Brew). And it documents his triumphant mid 1980s comeback (1986's "Tutu"), while premiering a brand-new track, "Hail To The Real Chief."