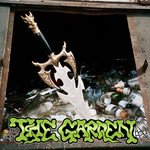 Fourth studio album from The Garden (Wyatt and Fletcher Shears)!

Though primarily self-produced, the album includes tracks co-produced by Dylan Brady, and Wharfwit, along with tracks featuring Ariel Pink, Khalif Jones (aka Le1f) and even a snippet from Carrot Top.