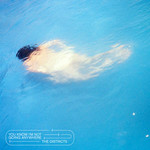 As they began to contemplate a new album, Grote and his longtime bandmates Pat Cassidy (guitar), Connor Jacobus (bass), and Braden Lawrence (drums) faced a transitional period that was painful for both personal and professional reasons, and found themselves fatigued and disoriented as a group. Grote also felt dysphoric from the anxiety-provoking state of the world today, while facing a daily battle with the dire health problems of his beloved dog. The Districts were forced to rethink everything.

While You Know I'm Not Going Anywhere builds on preceding albums, it takes an ambitious leap to a new level, exhibiting a widened sense of experimentation and expansiveness at its heart. There's Rhodes, Mellotron, strings, samples, drum machines, tape loops, Wurlitzer, "ambient swells," piano, synthesizers; Grote lists 12 instruments next to his name alone. Airy and understated, discordant and exuberant, and earnest all at once, You Know I'm Not Going Anywhere is the culmination of The Districts' growth and maturation through milestones and setbacks alike.