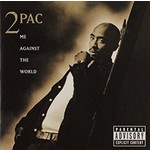 2Pac
Me Against The World (Double LP)

To celebrate the 25th anniversary of 2Pac's groundbreaking album Me Against the World, Interscope Records and Amaru Entertainment have reissued the double-platinum classic on 180-gram 2LP vinyl.

Me Against the World is widely considered to be the most poetic and cohesive body of work in the legendary rapper's entire catalog. 2Pac recorded the album when he was only 23, embedding his lyrics with incisive commentary on poverty, violence, and police oppression - and ultimately cementing his status as one of the greatest rappers in music history. Hailed by many as his magnum opus, including Rolling Stone's Cheo Coker in 1998 who said, "Me Against the World - by and large a work of pain, anger and burning desperation - is the first time 2Pac has taken the conflicting forces tugging at his psyche head-on…love him or hate him, 2Pac remains one of the most compelling characters in black popular culture". Me Against the World eventually landed on the "Definitive 200 Albums of All Time" list from the Rock and Roll Hall of Fame.

Me Against The World arrived on 14th March, 1995, debuting at #1 on the Billboard 200. Among the album's many standout cuts are "Temptations," "So Many Tears," and "Dear Mama," as well as the iconic title track. With Me Against the World nominated for Best Rap Album at the 1996 Grammy Awards, the platinum-selling, chart-topping "Dear Mama" earned a nomination for Best Rap Solo Performance.