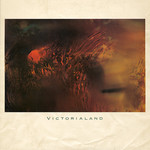 The largely acoustic, non-percussive album was made with Elizabeth and Robin, while Simon was working on This Mortal Coil's second album, Filigree & Shadow. Dif Juz label mate Richard Thomas guested on tabla and saxophone.

This is Victorialand's first vinyl pressing since the 80s, with this version cut at 33⅓ RPM.

A1. Lazy Calm
A2. Fluffy Tufts
A3. Throughout the Dark Months of April and May
A4. Whales Tails
B1. Oomingmak
B2. Little Spacey
B3. Feel-like Fins
B4. How To Bring a Blush to the Snow
B5. The Thinner The Air