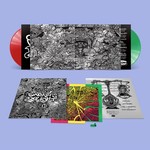 Nightmares on Wax is celebrating the 25th anniversary of the seminal Smokers Delight with a new one-off edition reissue.

Smokers Delight was the breakthrough record for Nightmares On Wax. It signalled a new approach after the more dance floor focused debut A Word of Science. Alongside Massive Attack's Protection, Portishead's Dummy and Tricky's Maxinquaye it was one of a handful of records to define a generation.

The reissue includes two completely new bonus tracks, alongside an alternative funk mix of Dreddoverboard and a luxurious, sprawling live take of the timeless Nights Introlude, recorded in 2014.

The music Nightmares On Wax made in the 90s was radical for the way that it spliced together sonic styles with aptitude. George Evelyn created a bold vision for the post-genre future here - one that still exerts great influence over many contemporary artists.

Recorded with long term collaborators Chris Dawkins on guitar, Hamlet Luton on bass, Robin Taylor-Firth on keys and Shovell on percussion; music lovers from around the world were intoxicated by this bassy, afterhours sound that became the backdrop to a million late night living room sessions.

"Pulling from the same influences that defined the late 1980s rave explosion... reconfigured the UK's summer of love for the Discman generation while remaining just as suited to chill-out room comedowns or Ibiza sunset sessions." - Fact Magazine