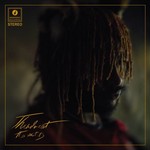 Thundercat
It Is What It Is

Thundercat's new album It Is What It Is, produced by Flying Lotus and Thundercat, follows his game-changing album Drunk. That record completed his transition from virtuoso bassist to bona fide star and cemented his reputation as a unique voice that transcends genre. "This album is about life, loss, love and the ups and downs that come with that," Bruner says about It Is What It Is. "It's a bit tongue-in-cheek, but at different points in life you come across places that you don't necessarily understand… some things just aren't meant to be understood."

As is often the case on Thundercat albums, a variety of guest stars appear on It Is What It Is. It's an intriguing mix of talents here, one that simultaneously expands and refines the album's sonic universe. Thundercat revisits established partnerships with Miguel Atwood-Ferguson, Ronald Bruner Jr, Louis Cole, Dennis Hamm and Kamasi Washington on It Is What It Is, but there are new faces too: funk icon Steve Arrington (Slave), Childish Gambino, Steve Lacy (The Internet), plus Lil B Ty and Dolla $ign on the ultra smooth Fair Chance - a song explicitly about his friend Mac Miller's tragic passing. The aptly titled I Love Louis Cole is another standout - "Louis Cole is a brush of genius. He creates so purely," says Thundercat. "He makes challenging music: harmony-wise, melody-wise and tempo-wise but still finds a way for it to be beautiful and palatable."

Thundercat's music starts on his couch at home: "It's just me, the bass and the computer". Nevertheless, referring to the spiritual connection that he shares with his longtime writing and production partner Flying Lotus, Bruner describes his friend as "the other half of my brain". "I wouldn't be the artist I am if Lotus wasn't there," he says. "He taught me… he saw me as an artist and he encouraged it. No matter the life changes, that's my partner. We are always thinking of pushing in different ways."
Thundercat's It Is What It Is is both another soulful triumph for the artist and also the sort of record that only he could make.

Thundercat forms a cornerstone of the Brainfeeder label; he released The Golden Age of Apocalypse (2011), Apocalypse (2013), followed by The Beyond / Where the Giants Roam featuring the modern classic Them Changes. He was "at the creative epicentre" of the 21st century's most influential hip-hop album - Kendrick Lamar's To Pimp a Butterfly, before releasing Drunk in 2017.