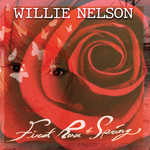 Alongside his new compositions on the album, Willie pays musical tribute to a variety of pop and country songwriters and performers, interpreting songs penned by Toby Keith ("Don't Let The Old Man In"), Billy Joe Shaver ("We Are The Cowboys") and Pete Graves ("Just Bummin' Around" - a song recorded by Jimmy Dean, Dean Martin and others).
An intimate journey through life and love as seen through Willie's unique perspective First Rose Of Spring finds the artist deep in every moment, sharing profound insights and experiences through songs he's written and songs he loves to sing. Among the younger songwriters celebrated on the album are the composing teams Randy Houser, Allen Shamblin & Mark Beeson ('First Rose Of Spring') and Marla Cannon-Goodman, Casey Beathard & Don Sampson ('Stealing Home').

Closing First Rose Of Spring is Willie's sublime performance of Charles Aznavour's 'Hier encore', a 1964 chanson which became an American country classic (and Roy Clark's biggest hit) as 'Yesterday When I Was Young' (English lyrics by Herbert Kretzmer) in 1969 and, over the years, became a beloved standard performed by a multitude of stars including Bing Crosby, Shirley Bassey, Dusty Springfield, Mel Tormé, Jack Jones, Lena Horne, Andy Williams, Glen Campbell, Julio Iglesias, Johnny Mathis, Elton John and many more. A bittersweet reflection on mortality and life's transient (and transcendent) beauty, 'Yesterday When I Was Young' conveys universal thoughts and emotions. On First Rose Of Spring Willie Nelson shares those feelings through music and makes every song his own.