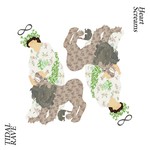 There's something slightly claustrophobic and unsettling at times about the churning dense weave of the three guitars and bass backed by ghostly organ and insistent drum pulse. Add the character provided by the interchange between three songwriter-guitarist-vocalists, one with distinctive vibrato reminiscent of The Terminals' ominous baritone proclamations, and it's possible to imagine this album as the product of another era.

Tidal Rave started out of bedroom jam sessions in a Nikau St flat in the inner-Wellington suburb of Newtown, developing into 6-piece band which released a self-titled EP in 2017.