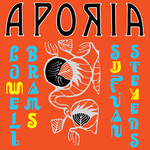 Sufjan and Lowell never stopped making music together. After over 10 years without a co-release, the music on their new, mostly instrumental album Aporia is everything that Insomnia is not. Where Insomnia alienates, Aporia charms.

The 21 songs here are tightly crafted, resonating with a gem-like intensity. In the spirit of the New Age composers who sanded off the edges of their synths' sawtooth waves, Aporia approximates a rich soundtrack from an imagined sci-fi epic brimming with moody, hooky, gauzy synthesizer soundscapes. The album may suggest the progeny of a John Carpenter, Wendy Carlos, and Mike Oldfield marriage, but it stands apart from these touchstones and generates a meditative universe all its own.