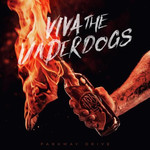 Australian metal band Parkway Drive have announced Viva The Underdogs, the soundtrack to the band's documentary film by the same name!