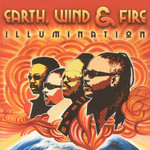 Out of press since its' original release, the album features collaborations with Destiny's Child's Kelly Rowland, Outkast's Big Boi, will.i.am and Kenny G.