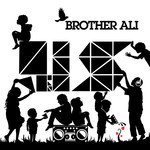 Following the critically acclaimed The Undisputed Truth (2007), Brother Ali's 2009 release, Us, showed the progression that helped make him such an enduring figure in hip-hop.

With a musical backdrop provided by Ant, the pair stay true to their influences of blues and soul, adding some live instrumentation for a lush sonic landscape. Guest appearances by Chuck D (Public Enemy), Freeway, Joell Ortiz and Stokley Williams (Mint Condition) only add to the beautifully intelligent and entertaining album Brother Ali and Ant made for, and about, all of Us.