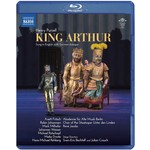 The collaboration of the poet John Dryden and Henry Purcell marked a conspicuous leap forward for English opera. Their greatest project, King Arthur, is a five-act dramatick opera, the text of which had its origins in a patriotic musical play Dryden had written in 1684 but which he radically overhauled. The result was a work that appealed to the audiences enthusiasm for fine costumes, lavish sets, ingenious stage machinery and a cast of singers, dancers and instrumentalists, containing vocal show-stoppers such as the imperishable Frost Scene and Fairest isle. This critically acclaimed staging uses a new performing edition by René Jacobs, and is sung in English with German dialogue.