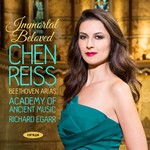 Israeli soprano Chen Reiss has rapidly established a reputation as one of the most impressive voices on the operatic stage. She came to prominence as a member of the Bavarian State Opera under the music directorship of Zubin Mehta, and has for a number of years been a resident artist at the Vienna State Opera. Reiss has performed leading parts at the Théâtre des Champs-Élysées, Teatro alla Scala, Semperoper Dresden, Deutsche Oper Berlin, Netherlands Opera, Wiener Festwochen, Maggio Musicale Fiorentino, Opera Company of Philadelphia and the Israeli Opera. She is joined here by Richard Egarr and the Academy of Ancient Music for a recital of Beethoven arias.

"'Fliesse, Wonne ihre' is a substantial number, with a long introduction that already showcases alert, finely textured playing from the Academy of Ancient Music under Richard Egarr, who shapes the whole thing with steady glow. The bright, gleaming tone of Reiss's soprano registers immediately, too, and with rock steady coloratura she bestows an angel's blessing on the emperor...Reiss's performance [of 'Primo amore'] is ardent, full of feeling, and indeed she captures the individual qualities of each work and each heroine." Opera Disc of the Month May 2020

"The glamorous Israeli soprano presents a selection of arias by the 250th birthday boy. It's a feat, considering that she wisely omits Beethoven's most famous soprano solo - Leonore's big scene from Fidelio - but sings Marzelline's aria in his only opera with her bright soubrette voice and winning, smiling demeanour." Sunday Times

"Reiss led this project, researching and choosing her own arias, and her strong personal connection with her material clearly shows. She possesses an elegant and silvery soprano and is already a greatly successful Susanna and Sophie, but the middle of the voice is growing in warmth and amplitude and without pushing her resources." Five Stars Opera Now

"With stunning accompaniments under Richard Egarr this is a thrilling disc with largely unhackneyed Beethoven works - an ideal addition to many Beethoven enthusiasts' collection." MusicWeb Recommended May 2020