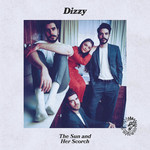 Dizzy
The Sun And Her Scorch

An album infinitely brightened by Dizzy's heavenly melodies, The Sun and Her Scorch brings truth-telling to confessions of insecurity and resentment, and fear of failure. Dizzy instill their songs with a warm and open-hearted sincerity, an extension of the gentle camaraderie within the band itself.

Formed in 2015, Dizzy's origins lie in the longtime friendship between singer Katie Munshaw and Charlie Spencer, who met in ninth-grade math class and later sang together in the school choir. Upon graduating high school, the two decided to sidestep the university path and start a band, enlisting Charlie's brothers, Mackenzie and Alex. After playing shows around Toronto, Dizzy released Baby Teeth in August 2018, which lead to their collecting of the Canadian music's Juno Award, the band also found Baby Teeth included on the 2019 Polaris Music Prize Long List.