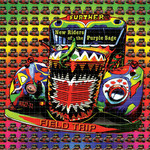 With Billboard magazine hailing the New Riders Of The Purple Sage as "the definitive band of the country-rock genre," 1972 was a year of major growth for the band. By the time Summer rolled around, Buddy Cage was now firmly entrenched as Jerry Garcia's replacement on pedal steel guitar and their second studio album, Powerglide, was getting rave reviews.

On the live front, they were beginning to fill concert halls across the U.S. while continuing to emerge from the shadows of the Grateful Dead with an intoxicating mix of classic and original American songwriting from the worlds of country, rock, bluegrass, and soul. August 27, 1972 found the New Riders once again on the bill with the Grateful Dead for what turned out to be one of the more legendary events in this subculture's history. On the grounds of what is now the Oregon Country Faire, Chuck Kesey (brother of author and Merry Prankster icon Ken Kesey) put together this benefit concert, which quickly became known as the "Field Trip," for the local Springfield Creamery.

Taken off the original 16-track master tapes, Field Trip is a crystallized moment in time-capturing all the elements of the day along with the thumping and driving energy of a smokin' set delivered by the New Riders. Early versions of "Groupie," "Whiskey" and "Linda" are offered, along with a blazing "Whatcha Gonna Do."