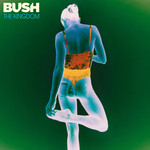 Bush, one of the biggest alternative rock bands of the 1990s, is back with a brand-new album.

The Kingdom features the singles 'Bullet Holes' and 'Flowers On A Grave'. "Bullet Holes" was first heard by audiences all over the world atop the end credits to the international blockbuster "John Wick: Chapter 3 - Parabellum".

Since emerging in 1992, the London-based quartet has earned 18 consecutive Top 40 singles on the Modern Rock and Mainstream Rock charts, including alternative radio staples "Comedown", "Glycerine" and "Machinehead".