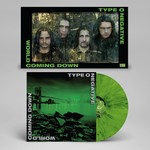 First worldwide stand-alone release on vinyl.
Comes in a gatefold tip-on style jacket with an exclusive poster and is pressed on 180g green and black mixed coloured vinyl. Newly remastered for maximum fidelity!

Type O Negative is an American goth-metal band formed in Brooklyn in 1989 by Peter Steele (lead vocals, bass), Kenny Hickey (guitar, backing vocals), Josh Silver (keyboards, backing vocals), and Sal Abruscato (drums, percussions), who was later replaced by Johnny Kelly. World Coming Down is their fifth studio album and is considered to be the darkest of the band's releases, having been written after a series of deaths in Steele's family.

When issued on CD, the album leads off with a "joke intro": in this case, "Skip It", 11 seconds of staccato band noise meant to sound as if the listener's CD player is skipping. For the debut of this album on vinyl, "Skip It" has been edited to sound like the listener's record is skipping on a turntable. The track "White Slavery" deals with cocaine addiction. Two other songs, "Everyone I Love Is Dead," and "Everything Dies", touch on the difficulties of watching family members and loved ones pass away. "Who Will Save the Sane?" deals with mental illness and psychiatry.

The album contains three soundscape tracks: Sinus, Liver and Lung, which are named after internal organs, as segues between songs. Each of these songs is intended to suggest the possibilities of deaths the band members may have suffered at the time. At the end of the album is a cover song of Day Tripper, which is a medley of three Beatles songs.