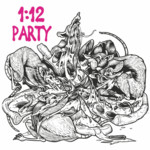 Tāmaki Makaurau's 1:12 Records is proud to introduce their latest vinyl concoction, 1:12 PARTY; a compilation of 14 tracks from Auckland's most exciting DIY bands and artists.

TRACK LIST DETAILS:
Side A
THEE GOLDEN GEESE - 1:12 Party Emergency
Led by Auckland entertainer extraordinaire, Mathew Crawley, Thee Golden Geese are here to kick the party into high gear with their made to measure 1:12 insta-anthem.

THE CAVEMEN - Satan Is Her Name
Fresh from their 2019 'tour of duty' through SE Asia, Australasia, the Americas and Cuba and on the back of 2 LPs for Slovenly Records (USA /Europe), 1:12 Records proudly present this exclusive new track by one of their foundation bands.

KING KAIJU - Intoxica
Out of the swamps of Kingsland, King Kaiju bring their own brand of exotica stomp. Their swinging cover of the Centurians classic 'Intoxica' (featured in John Water's classic Pink Flamingos) King Kaiju changes the party vibe to something more…sleazy.

LABRETTA SUEDE AND THE MOTEL 6 - In Full
Why settle for a-la-carte when the buffet is open? Labretta is hungry and she wants to sample everything. No one rocks the party like the Motel 6. Refresh your drink then spill it on the rug while you cut one…a rug that is…Cha, Cha, Cha…

VINCENT H.L - Golden Sun
Vincent H.L has fronted many of our favorite bands (Whipping Cats, Diamonds and Dirt…) and in 2018 he released one of our favorite 1:12 LPs, Weird Days. The weed-soaked pop of Golden Sun reminds us of an in-form Evan Dando cut.

Side B
DICK MOVE - Ladies Night
Side B is hot out of the blocks with Dick Move's high-octane banger, setting the kaupapa for a great night out. Back off creeps, Dick Move are here to party. Every night is ladies night…

BLOODBAGS - Smokin' It Up
Featuring Andrew Tolley (Hasselhoff Experiment, Bloody Souls, Mr Slackjaw) -- in our estimation a living legend --and Dirtbag Radio kings Sam Ralston and Matt Rapley, Bloodbags add to their 1:12 single-cut cachet with this dirty blinder. Got a light?

TOOMS - Porch Mix
Auckland has produced its fair share of great two pieces, but Tooms re-wire the format with their bass and drum / call-and-response vocals stylings. 'Porch Mix' slips on the knuckle dusters and steps on the distortion pedal. The best kind of noise control for a 1:12 party

HALLELUJAH PICASSOS - Fire Sandpaper
Don't call it a comeback; in 2019, hometown hero's Hallelujah Picassos released 'Voices of Exuberant Hellhounds', a record as ambitious and exciting as anything they have produced over their 30+ years, Fire sandpaper cranks up the space reverb and delivers an electro-clash remix of the LP's closing track.

ECHO OHS - The Moon
Driving space rock from our favorite spaghetti-surf combo. Echo Ohs always pack a punch, but here they've opted for the mescaline and the echo dek as essential supplies for their intergalactic thrill ride.

KING KETCHUP - Doctor Hokota
King Ketchup take the party vibe into some way-out territory with their track Doctor Hokota. High concept for us garage psych types and backed by killer live shows, we are keen to be on this train, regardless of if it stays on the tracks.

MAGIC FACTORY - Sorry For Your Loss
Deserving the moniker of 1:12 supergroup, Magic Factory feature a flexible line-up of up to 9 members at any one time. Sorry For Your Loss is southern dad-rock kiwi style. Enjoy and then return to side A.

B1. DICK MOVE - Ladies Night
B2. BLOODBAGS - Smokin' It Up
B3.TOOMS - Porch Mix
B4. HALLELUJAH PICASSOS - Fire Sandpaper
B5. ECHO OHS - The Moon
B6. KING KETCHUP - Doctor Hokota
B7. MAGIC FACTORY - Sorry For Your Loss