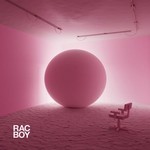 BOY is a melody-driven indie-electronic record that sees musician and producer André Allen Anjos, aka RAC, push his artistic limits by thematically exploring his complex childhood.

Anjos was raised overseas to parents who both worked as missionaries. His mother is American, and he always felt torn between worlds in terms of nationality, first language, even the concept of home itself. He struggles to distil it all in person, but the music he's made ruminating on it runs the gamut of emotions that come up for him. "I didn't feel a part of any specific world, it was a bit alienating," he recalls. Anjos worried his family when he was younger because he didn't talk to adults until he was around eight-years-old. "I was confused about language," he explains. He could speak, but he wasn't comfortable, so he didn't. "I didn't feel Portuguese, I didn't feel American. In the midst of that, I found music and it became my voice."

Through music, he also soon discovered his skills as a master collaborator, and the wealth of guest talent on BOY is a testament to RAC's creative magnetism. "It's conversational," he says of his working style with the artists he features. "We find shared experiences and I give them space to tell their story through my lens." For BOY, his choice vocalists include Gothic Tropic, Jamie Lidell, LeyeT, and St. Lucia.