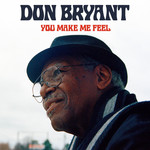 If you turn your ears a certain way, You Make Me Feel by soul great Don Bryant can be heard as a love letter to his wife of 50 years, Ann Peebles.

Produced by Scott Bomar, who recently scored Dolemite Is My Name and mixed by Matt Ross-Spang (Elvis Presley, Al Green, John Prine), You Make Me Feel continues Don's resurgence with newly written music and a revisit to Don's celebrated back catalogue, where he's interpreting some of his songs for the first time.

Don is nearing the age of 80, and You Make Me Feel is his third solo album. His 1969 debut Precious Soul was produced by Willie Mitchel, who planned for Bryant to be Hi Records' next star. Don instead took a supporting role and made a career as a Hi Records hit man, namely as the songwriter and background singer for Peebles, who topped the charts in 1974 with "I Can't Stand the Rain". Ann retired from music in 2012, and Don returned to the spotlight in 2017 with his second album, Don't Give Up on Love.