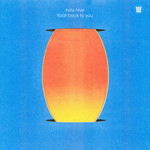 Holy Hive
Float Back To You

Homer Steinweiss, the Brooklyn based soul/funk drummer, always had a soft spot for folk music. Paul Spring, a young idealist folk singer traveling the country with his guitar, always had a beautiful falsetto in his back pocket. A family introduction would lead to Homer producing a few solo records of Paul's, which would eventually lead to the creation of Holy Hive.

Homer has been drumming professionally since 2000 and has provided the back beat to records by Amy Winehouse, Bruno Mars, The Jonas Brothers, and Lady Gaga to name a few. He has toured the world over with soul acts like Sharon Jones & The Dap Kings and The Arcs.

The symbiotic relationship of Homer and Paul has been likened to that of an oxpecker and a black rhino. Paul's delicate falsetto and fluttering guitar rests atop Homer's brawny drums in perfect harmony. There are many levels to Holy Hive, some of them show up on the surface, but some of them are like the album's title track; you listen to a gorgeous love song only to find out later it is about coming home to your cat.