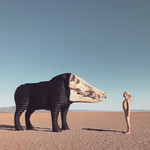 White vinyl with pinkish swirl. Honus Honus (aka Ryan Kattner) has devoted his career to exploring the uncertainty between life's extremes, beauty, and ugliness, order and chaos. The songs on Dream Hunting in the Valley of the In-Between, Man Man's first album in over six years and their Sub Pop debut, are as intimate, soulful, and timeless as they are audaciously inventive and daring, resulting in his best Man Man album to date.