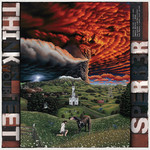 SPERB3R
Think On Your Feet (LP)

The latest project by Tāmaki Makaurau based musician Dan Sperber finds him in fine voice, both as the vocalist and of course for his extraordinary fretwork.

Well regarded as one of Aoteroa's finest guitarists, Dan is supported by Olivier Holland (Double Bass), Cameron McCurdy (Drums) and Neil Watson (Pedal Steel Guitar) 'Think On Your Feet' has somewhat of a loose feel. That in no way is to say that the playing is sloppy. On the contrary. It's superbly crafted but reflects the relaxed setting the band created for themselves.

Unlike albums that can get lost in pre-production, Sperber's approach to this recording was to introduce the material to his cohorts as they entered the studio, allowing them a freedom that is palpable.

The incredible cover art by Gareth Price only adds to the astounding quality of the project.

Listen to Double Tracked via Soundcloud