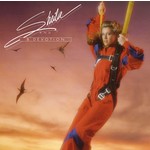 $33.00 In stock with supplier
ETA: 2-5 business days add to cart more by this artist

Sheila & B. Devotion
King Of The World (40th Anniversary Edition)

King of the World is the final album by French disco act Sheila and B. Devotion, originally released in 1980. The album which was both written and produced by Bernard Edwards and Nile Rodgers of Chic.

The album displays some elements unusual in Chic productions, such as prominent guitar solos in place of the breakdowns that were normally a staple part of the Chic sound, and some unusual lyrical subject matter, such as the sci-fi themed "Spacer" and a humorous song about credit cards.