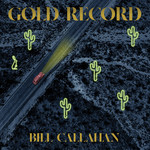 For his first record in....uh, well, just over a year (woot!), Bill Callahan gives us a Gold Record.

For Bill, preparing to tour for Shepherd In a Sheepskin Vest meant considering being away from home for long stretches of time - months, seasons, maybe as much as a year, who knew? Feeling his oats, Bill pulled out a few sketches from the notebooks and finished them up some. Before he knew it, he was recording them, and in the shuffle, new songs started popping up too.

It happened fast. Basics were recorded live, with Matt Kinsey playing guitars, guitars, guitars and Jaime Zurverza holding it down (then letting it go) on bass. Drums and horns were brought in for a couple songs. Spirits were high! Six out of the ten tunes were done first take; overdubs, when needed, came equally quickly. Listening, one hears the intuitive cohesion coming together richly, back of Bill's titanic voice spread across the stereo spectrum: the gentle-yet-spirited conversation of Bill and Matt's guitars, the subtle percussing of bass and drums and oddments of trumpet, woodwind and synth, striking notes decorous and discordant, sounding for all the world like the naturally occurring sound meant to accompany and express lives lived everywhere.